Beyond arms control: challenges and choices for nuclear disarmament 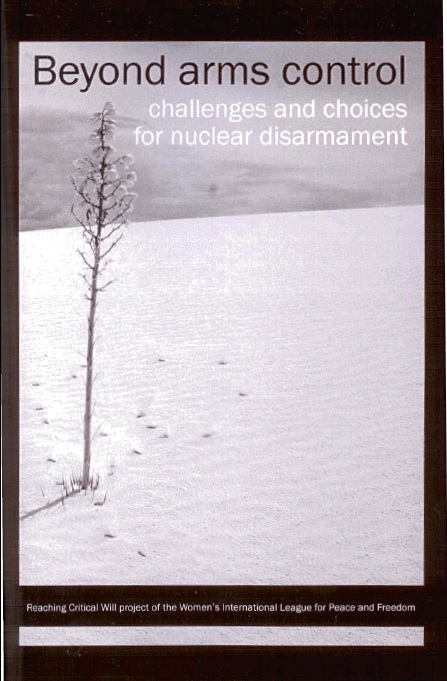 Beyond arms control is a collaborative work of non-governmental researchers and activists who critically examine the mainstream discourse of nuclear weapons.

Beyond arms control: challenges and choices for nuclear disarmament is a collaborative work of non-governmental researchers and activists who critically examine the mainstream discourse of nuclear weapons. The book explores some of the most important challenges that governments and civil society will face at the 2010 NPT Review Conference and beyond, highlighting the prospects and pitfalls for nuclear disarmament in the current world order. Throughout, the authors demonstrate that nuclear disarmament must be pursued in the context of a broader movement for social and economic justice and equality.

Abolishing nuclear weapons without affecting change in the systems that sustain, promote, and in fact require the existence of nuclear weapons to survive is impossible. The military utility of nuclear weapons may be diminishing in the current world order, but nuclear weapons and nuclear power are still useful to the economic and political elite of many countries and will thus be pursued by others seeking the same elite status. The first step on this road is distinguishing the rhetoric from the reality and creating a new discourse for nuclear disarmament that promotes true human security.

Edited by Ray Acheson
Published by Reaching Critical Will, a project of the Women’s International League for Peace and Freedom

1. Rhetoric vs. reality: the political economy of nuclear weapons and their elimination: Darwin BondGraham, Jacqueline Cabasso, Nicholas Robinson, Will Parrish, and Ray Acheson

6. Nuclear futures for the Middle East: impact on the goal of a weapons of mass destruction: Merav Datan

10. The relevance of gender for eliminating weapons of mass destruction: Carol Cohn with Felicity Hill and Sara Ruddick