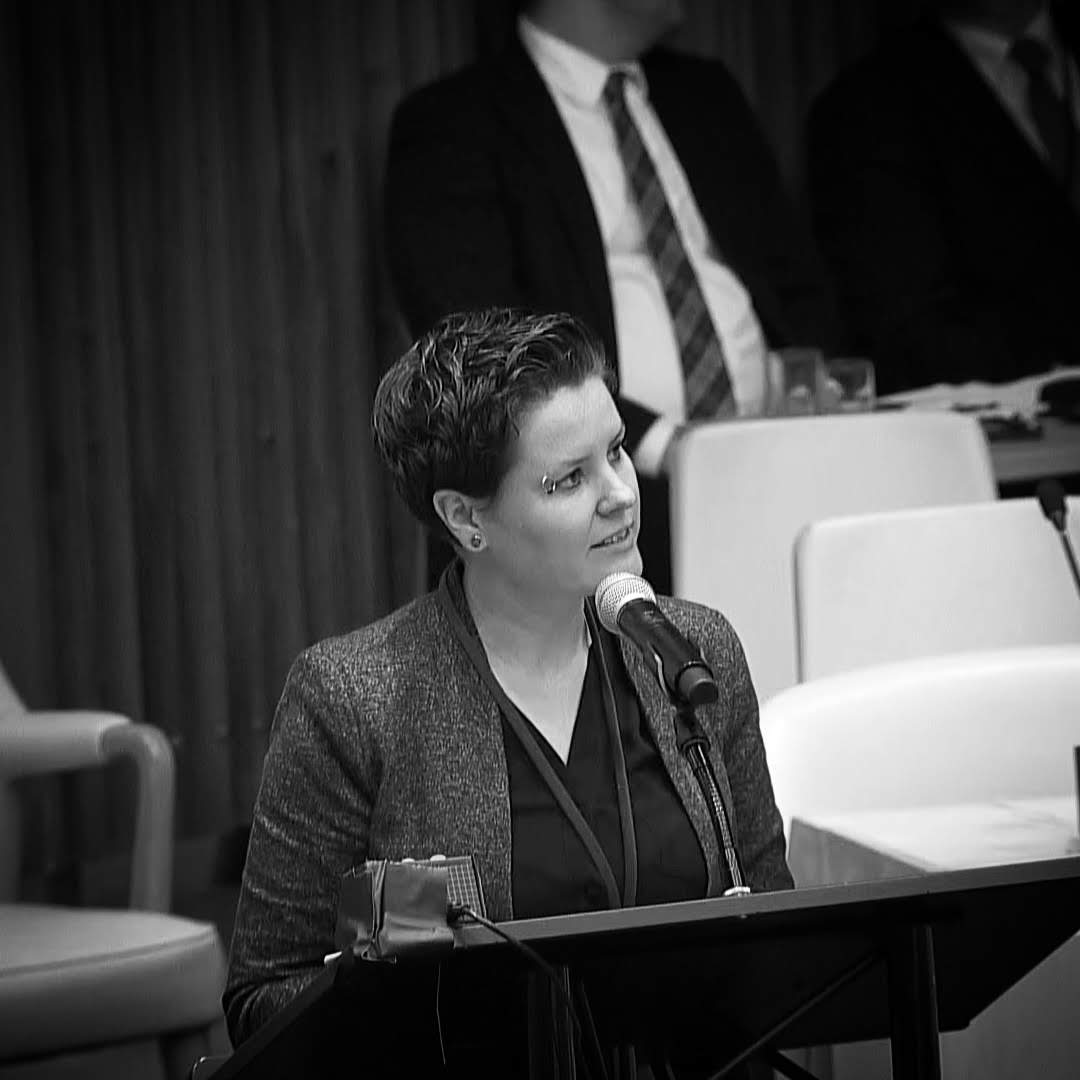 I’m speaking today on behalf of the International Campaign to Abolish Nuclear Weapons. With 532 partner organisations in 103 countries, we are a truly global movement. We were awarded the Nobel Peace Prize in 2017 for our work with governments to bring to fruition the Treaty on the Prohibition of Nuclear Weapons.

We’re speaking here today as a voice of passion and persistence in the quest to make our world more secure, more just, and more equitable. For us, abolishing nuclear weapons is about preventing violence and promoting peace.

What is true is that we live in a time where we spend more money developing new ways to kill each other than we do on saving each other from crises of health, housing, food security, and environmental degradation.

What is also true is that after 73 years, we still live under the catastrophic threat of the atomic bomb.

We should have solved this. We haven’t only because a small handful of governments say they have a “right” to these weapons to maintain “strategic stability”.

And it is certainly neither strategic nor stable to reject and to undermine a treaty that prohibits these weapons.

In July 2017, the most democratic body of the United Nations adopted the Treaty on the Prohibition of Nuclear Weapons. 122 governments supported the Treaty then. Now, they are signing and ratifying it. Significant progress has been made towards its entry into force. More will join today, at a special ceremony here in the UN. If you haven’t yet joined, we encourage you to do so. If you can’t do it today, do it tomorrow. Every new signature and ratification builds momentum for the abolition of nuclear weapons.

We know some of you are experiencing pressure not to sign or ratify this treaty, just as many of you were subjected to pressure not to support the development of the treaty, not to participate in negotiations, and not to vote for its adoption. The governments that espouse the “value” of the bomb don’t want this treaty to enter into force.

This is because they already feel its power. They know what it means for their policies and practices of nuclear violence. It is already disrupting the financial flows needed to maintain the industry around nuclear weapons. Just today, ICAN campaigners visited BNP Paribas offices around the world to demand the bank divest from nuclear weapons.

This treaty is about bolstering the rule of law and protecting humanity. No one is safe as long as nuclear weapons exist. The death and destruction they cause cut across border, across generations. They undermine the achievement of the Sustainable Development Goals. They undermine our commitments to preventing climate change, promoting peace and equality, and protecting human rights.

This treaty is the new international standard on nuclear weapons. It compliments, but is not subordinate to, existing agreements aimed at controlling nuclear weapons. It goes further than any of these other instruments, making it clear that the possession of nuclear weapons is illegitimate, irresponsible, and illegal.

We know there is more work to be done. We have proven, collectively, that we are not afraid of hard work. So to all those governments and activists listening: please keep at it. The world changes when people work together relentlessly to change it. Don’t give up. Stand strong, stand together, and make it clear that we are living in a new reality in which nuclear weapons are illegal and where the only option for any reasonable state is to reject and eliminate them.

It’s time to sign the Treaty on the Prohibition of Nuclear Weapons.