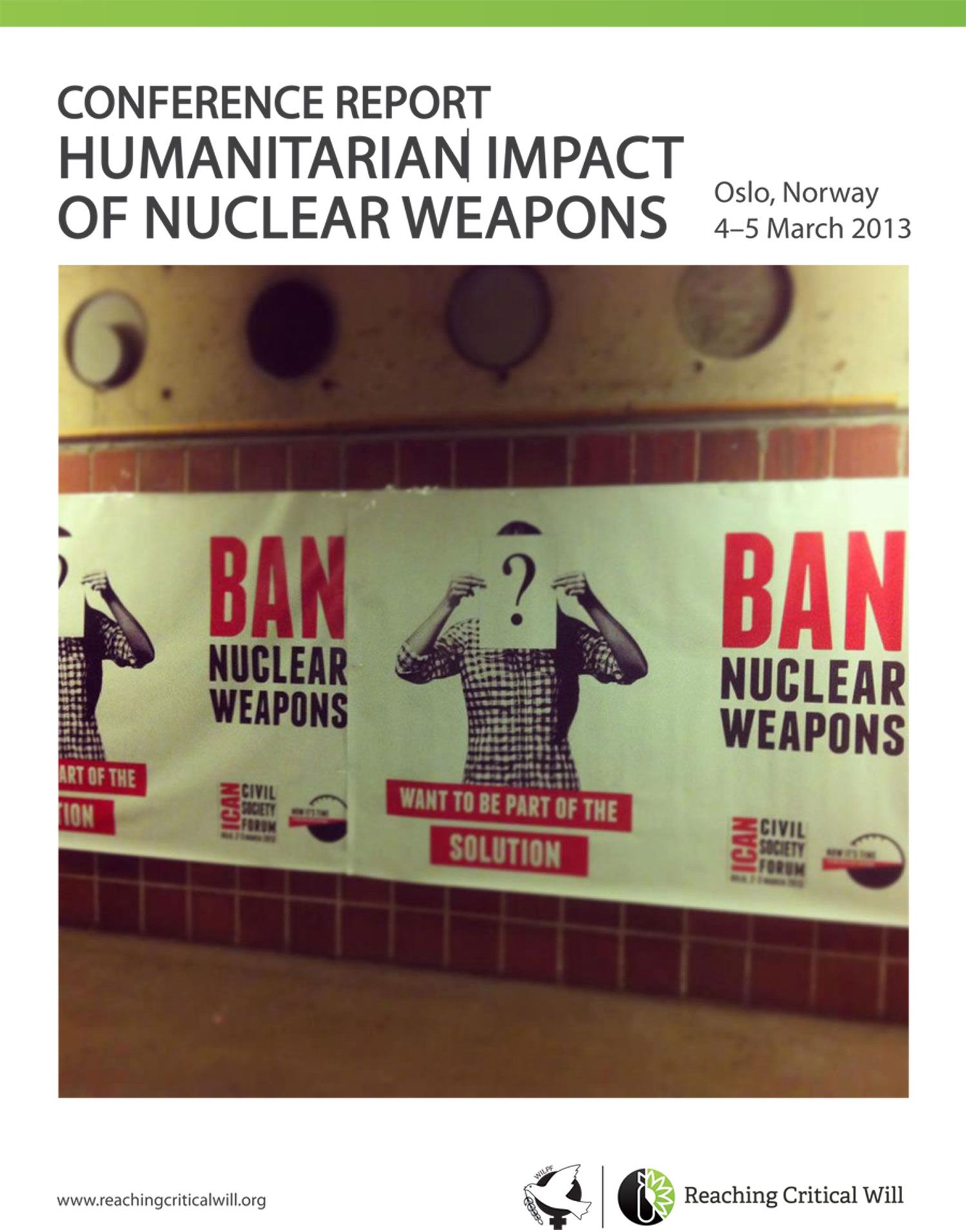 Reaching Critical Will has published a conference report for the meeting hosted by the government of Norway on 4-5 March 2013 on the Humanitarian Impact of Nuclear Weapons.

The report contains an analysis of the conference's importance, highlights from government and other interventions, a brief overview of the Civil Society Forum hosted by the International Campaign to Abolish Nuclear Weapons (ICAN) before the government conference, and lists some additional resources.

Some of this content can be found below. The rest is contained in the PDF available for download.

On 4–5 March 2013, the Norwegian government hosted a conference on the humanitarian impact of nuclear weapons in Oslo during which governments, UN agencies, international organisations, and civil society analysed the effects of the use of nuclear weapons on human health, the environment, economies, development, and more. The discussion was instrumental in reframing the discourse around nuclear weapons, focusing on the direct humanitarian consequences of their use rather than on myths of their alleged value for state “security”.

The key conclusions from the conference, highlighted by Norway’s Foreign Minister in his closing summary, were that no state or international body could adequately address the humanitarian emergency caused by a nuclear weapon detonation; that nuclear weapons have a demonstrated devastating immediate and long-term effects; and that such effects will not be constrained by national borders, and will have regional and global impacts. At the end of the conference, the government of Mexico announced that it will hold a follow-up meeting to continue this discussion.

This conference was the first time that governments have come together to seriously address the catastrophic humanitarian impact caused by the use of nuclear weapons. It also marked a significant change in perspective for many non-nuclear weapon states, which recognise that the current discourse on nuclear weapons has been insufficient to address the grave threats they pose to human existence and that the challenge posed by nuclear weapons to human and planetary survival must be addressed through preventative measures.

The discussion following each expert panel was surprisingly different from debates in the usual disarmament fora, such as nuclear Non-Proliferation Treaty (NPT) meetings, the UN General Assembly, and the Conference on Disarmament (CD). The discussion remained focused on the weapons themselves and avoided to a large extent the recycled rhetoric that polarizes typical nuclear weapons debates. Instead, the conference actually managed to move the agenda forward where many arms control and reduction initiatives have failed, by adding a new and refreshing dimension to the international discussion.

Another encouraging aspect of this conference was the key role played by international organisations and civil society. As NGO representatives working on nuclear weapons issues, it is very uncommon to be able to ask for the floor. But the interventions by the International Campaign to Abolish Nuclear Weapons (ICAN) and other international organisations and NGOs brought a dynamic dimension to the proceedings and should be a precedent for any upcoming nuclear weapons discussions.

Only two of the nuclear possessing states, India and Pakistan, attended the meeting. The other countries with nuclear weapons—China, Democratic People’s Republic of Korea, France, Israel, Russia, United Kingdom, and the United States—did not participate. The five permanent members of the UN Security Council boycotted the meeting, saying that the conference would “divert discussion and focus” away from other fora. The same day as the conference was held, the UK ambassador to the CD said that “all efforts should be focused on getting the CD back to work” and the Russian ambassador argued that the Oslo conference might “pull apart the CD agenda”. China’s ambassador warned that discussions external to the CD or UN system would undermine existing processes, while the US ambassador emphasised the need for a “practical, step-by-step approach to disarmament.”

In addition, it is worth highlighting that the nuclear weapon possessing countries engage in “alternative” process outside of the UN or CD frameworks all the time in order to address their non-proliferation concerns, such as through the Nuclear Security Summit or the Proliferation Security Initiative, among others. Yet no one accuses these processes of undermining the NPT or other existing processes.

The P5 missed an opportunity for dialogue in Oslo, but it did not stop countries and international organisations from moving forward. On the contrary, Mexico’s decision to host a further meeting on this issue was welcomed in all closing statements and received much appreciation by civil society representatives present in the room and around the world. Norway and Mexico’s initiative on this issue recognises that nuclear weapon free countries have an important role to play. The follow-up meeting is a key opportunity for all states, international organisations, and civil society to continue this discussion and to “deal decisively with nuclear weapons,” as the representative from the International Federation of Red Cross and Red Crescent Societies said.

In the end, the conference was important not only because it provided the space needed to reframe the discourse around nuclear weapons, but also because it was a significant first move towards negotiations of a treaty banning nuclear weapons.

Highlights from the conference
Ray Acheson

Full presentations from speakers and many interventions made from the floor are available online. The following are some of the brief highlights from the conference: