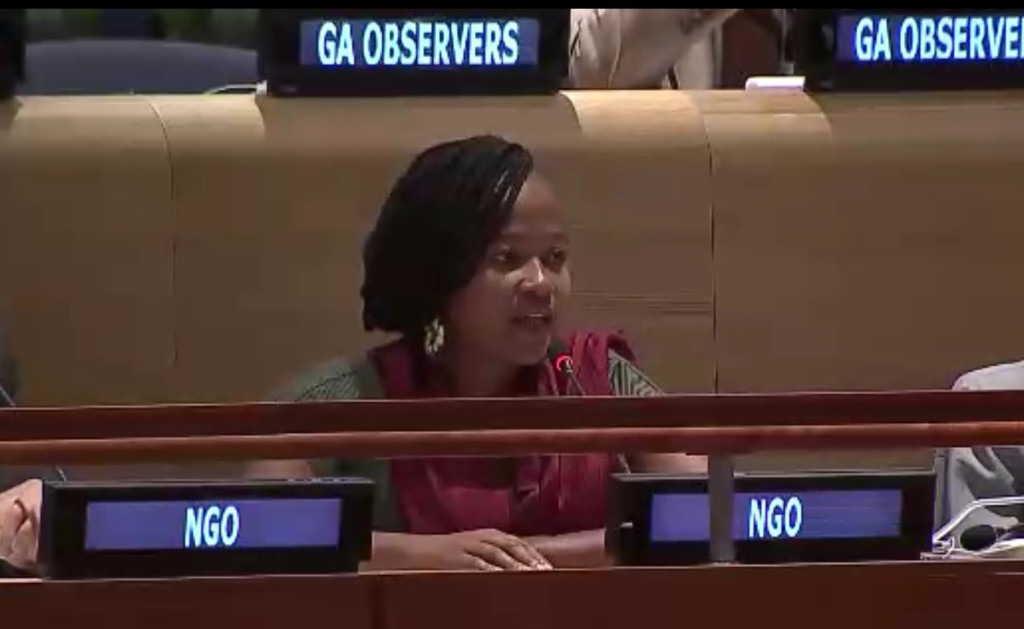 The overwhelming majority of countries condemned the continued existence of nuclear weapons and called for their banning and elimination at the first ever UN high-level meeting on nuclear disarmament on 26 September 2013. While some of the nuclear-armed states spoke disparagingly about the meeting’s importance, the rest of the international community demanded immediate action to remove the scourge of these weapons of terror once and for all.

The majority of participating states clearly voiced their frustration with the perpetual lack of progress and expressed their sense of urgency at achieving concrete goals. “Our collective efforts to move away from the nuclear abyss have remained too modest in ambition and brought only limited success,” warned the President of Austria. “Nuclear weapons should be stigmatized, banned and eliminated before they abolish us.”

Austria’s comments were amplified by messages from the African Group, the Arab Group, the Association of Southeast Asian Nations (ASEAN), the Community of Latin American and Caribbean States (CELAC), the New Agenda Coalition, the Non-Aligned Movement, and more. Many of these groups, as well as individual states including Brazil, Burkina Faso, Costa Rica, Malaysia, Mongolia, Mexico, Nicaragua, Nigeria, and the Philippines called for a treaty to prohibit nuclear weapons. The Foreign Minister of Nigeria argued that “efforts to outlaw, eliminate and consign nuclear weapons to the dustbin of history must start now.”

Another key inspiration for the demand to ban nuclear weapons is the renewed discussion about the catastrophic humanitarian and environmental consequences of nuclear weapons. The overwhelming majority of countries spoke with alarm about the grave threats posed by nuclear weapons. There were several significant group statements on this topic from the African Group, CELAC, the Non-Proliferation and Disarmament Initiative (NPDI), ASEAN, and the New Agenda Coalition. In addition, national statements by states including Algeria, Austria, Belarus, Botswana, Brazil, Chile, Denmark, Egypt, Germany, India, Ireland, Japan, Kazakhstan, Malaysia, Mexico, Montenegro, New Zealand, Nicaragua, Norway, Paraguay, Philippines, Switzerland, Thailand, and Uganda focused on concerns about the humanitarian impact of nuclear weapons.

The Irish Foreign Minister noted that the re-emergence of the humanitarian consequences narrative offers an opportunity to return to the original principles of the nuclear Non-Proliferation Treaty. He argued that the humanitarian imperative for nuclear disarmament is “written into the DNA” of the NPT. Indeed, the NPT recognizes the catastrophic consequences of nuclear weapons in its preamble, calling for “every effort to avert the danger” of nuclear war and to “safeguard the security of peoples”.

In this spirit, the Mexican Foreign Minister invited all states to attend the second international meeting on the humanitarian consequences of nuclear weapons, to be convened on 13–14 February in Nayarit. This conference will provide another opportunity to examine the impact of the use of nuclear weapons and will once again clearly demonstrate that the only way to prevent such unspeakable suffering is to ban and eliminate nuclear weapons.

Many speakers, including those from Algeria, Austria, Brazil, Chile, CELAC, Finland, Ireland, Malaysia, Mexico, Montenegro, NPDI, New Zealand, Paraguay, Switzerland, and of course Norway welcomed the recent conference on the humanitarian impact in Oslo in March 2013. Many of these statements referred to its conclusion that no capacity exists to provide any meaningful humanitarian relief, and most of them looked forward to the follow-up conference in Mexico.

Many states also welcomed other new initiatives, such as the open-ended working group on taking forward multilateral nuclear disarmament negotiations in Geneva. And the Non-Aligned Movement announced that it will introduce a resolution to the General Assembly containing a “roadmap” for nuclear disarmament. The items in this proposal include negotiations of a treaty prohibiting and eliminating nuclear weapons, the designation of 26 September as an international day for nuclear disarmament, and convening a conference in five years to review progress on disarmament.

In an attempt to counter this rising wave of states free of nuclear weapons asserting their agency over the nuclear disarmament question, the nuclear-armed states complained about “distractions” from “existing processes”. The nuclear-armed states, and some of their allies that still believe they “benefit” from nuclear weapons, argued that the step-by-step approach to disarmament is the “only” way forward.

In a defensively worded joint statement by France, the United Kingdom, and United States, the three nuclear-armed states expressed “regret” that some states and civil society have decided to highlight the humanitarian consequences of nuclear weapons: “While we are encouraged by the increased energy and enthusiasm around the nuclear disarmament debate, we regret that this energy is being directed toward initiative such as this High-Level Meeting, the humanitarian consequences campaign, the Open-Ended Working Group, and the push for a Nuclear Weapons Convention.” They argued that energy should instead be directed to existing processes and making progress on the step-by-step agenda.

However, as the Philippines noted, the step-by-step process has become synonymous with foot dragging. Despite rhetoric in favour of a nuclear weapons free world, the nuclear-armed states have done little to concretely implement their obligations. While the US representative argued that they have gone “beyond dialogue to concrete actions,” the only activity these countries can point to is the supposed development of a glossary of nuclear terms. More than 65 years after the first atomic weapon was used, this is an absurd notion of “concrete action”.

Many countries criticized the slow and even stagnant pace of nuclear disarmament-related activities. They also emphasized how unacceptable it is that the nuclear-armed states are modernizing their arsenals, moving the world even further away from abolishing these weapons. They highlighted the egregious amount of money and resources wasted on maintaining and modernizing nuclear arsenals. The Brazilian Vice Minister argued that half the amount of money invested annually in nuclear weapons would be sufficient to achieve the Millennium Development Goals by 2015. The statements of Bangladesh, CELAC, and the African Group called for diversion of existing resources from nuclear weapons to eradicating poverty and hunger and to ensure socio-economic development.

Notes from the balcony

While a few of the statements delivered have been heard many times before, the high-level meeting turned out be yet another significant sign that the discourse around nuclear weapons has changed. Most of the statements highlighted the humanitarian impact of nuclear weapons, which shows a growing confidence and resolve that this is a credible path toward overcoming the challenges associated with making progress on nuclear disarmament. In the opinion of civil society, and many governments, that path should lead towards outlawing and eliminating nuclear weapons.

In their joint statement, France, the United Kingdom, and the United States expressed concern that these other efforts “shift the focus away from the serious threats posed by the non-compliance” challenges. However, these states’ own failure to comply with their disarmament commitments and obligations is the foremost challenge to nuclear disarmament. Their continued sense of entitlement to possess nuclear weapons, eloquently criticized by the Vice Minister from Brazil, promotes proliferation and undermines attempts to diminish the salience of nuclear weapons in international politics. That states have failed to achieve so many of the steps in the step-by-step approach is not a coincidence. It just highlights how difficult it is for states to let go of a weapon while still considering it essential for one’s security.

Any credible path towards a world free of nuclear weapons must begin with a clear agreement within the international community that all nuclear weapons are unacceptable and they should not be legal to possess. Countless delegations quoted UN Secretary-General Ban Ki-moon’s recent remark that “there are no right hands for the wrong weapons.” There is near universal consensus on the fact that nuclear weapons must no longer exist, for all of our sakes.

Speaking on behalf of civil society during the high-level meeting, Nosizwe Lise Baqwa of the International Campaign to Abolish Nuclear Weapons (ICAN) noted, “History shows that legal prohibitions of weapon systems—of their use or their possession—facilitate their elimination.” She explained, “Weapons that have been outlawed increasingly become seen as illegitimate. They lose their political status, and so do not continue compelling money and resources to be invested in their production, modernization, proliferation, and perpetuation.” Nuclear weapons are already recognized to be incompatible with international humanitarian law and with the survival of humanity itself, as Joseph Gerson of the American Friends Service Committee pointed out, also speaking on behalf of civil society. “Nuclear weapons do not and cannot bring security,” he argued. “They bring only the threat of death and destruction.”

The high-level meeting provided an excellent opportunity for states from around the world to reflect upon their role and responsibility for nuclear disarmament and the challenges they face in achieving the long-sought goal of nuclear abolition. Now is time for these states to take action on the words they brought to the meeting. Now is the time to ban and eliminate nuclear weapons, with or without those states that continue to cling to their arcane vestige of cold war power politics.