Trading arms, bombing towns: the lethal connection between the international arms trade and the use of explosive weapons in populated areas

The First Conference of States Parties of the Arms Trade Treaty (ATT) concluded its work in Mexico on 27 August. This week, London is hosting one of the world’s biggest arms fairs. Next week, Austria will host a meeting of like-minded states geared toward developing a political commitment to end the use of explosive weapons in populated areas.

What is the connection between the ATT, the arms fair, and the use of explosive weapons?

The goals and status of the ATT 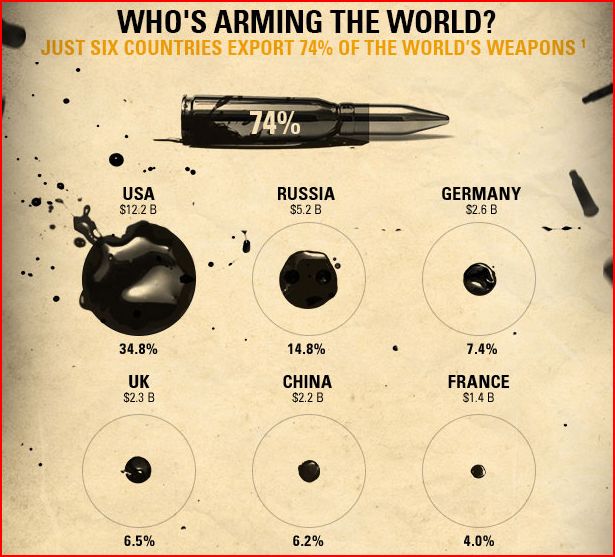 The ATT prohibits the sale of weapons if they would violate arms embargoes or other international obligations, or be used to commit genocide, crimes against humanity, breaches of the Geneva Conventions, attacks against civilians or civilian objects, or other war crimes. It also requires that states take into account the risk of the weapons being used to undermine peace and security; violate international humanitarian law or human rights law (including gender-based violence); or commit acts of terrorism or transnational organised crime. The stated objectives of the Treaty include preventing the diversion of weapons to the illicit market; contributing to international and regional peace, security, and stability; and above all, reducing human suffering. This was the key motivation for states and civil society to call for the regulation of the international arms trade in the first place.

The ATT currently has 73 states parties and 59 signatories, which include many of the world’s largest arms exporters and importers. The United States, which is responsible for about 31% of the global arms trade, is a signatory. Germany, France, UK, Spain, Italy, which are #4–8 of the top ten exporters, are all states parties. Ukraine, #9, is also a signatory. Of the top ten importers, only Australia is a state party and Republic of Korea, Singapore, Turkey, UAE, and US are signatories of the Treaty.

In Yemen, where a coalition led by Saudi Arabia has been conducting air strikes against the Houthis, hundreds of civilians have been killed. The bombs have hit schools, homes, and mosques. Amnesty International has noted, “Five months since the onset of the coalition airstrike campaign, innocent civilians continue to be killed and maimed every day, raising serious concerns about an apparent disregard for civilian life and for fundamental principles of international humanitarian law.” In May, the city of Saada was declared a military target, in breach of IHL, and now lies in ruins. A village, Sabr, has been almost completely destroyed. Amongst the rubble researchers have found US-designed and / or manufactured bombs and cluster munitions, as well as components for bombs made by an Italian-based subsidiary of a German company. The United Kingdom has supplied Typhoon jets and other equipment and support to the Saudi military. The US recently approved $46 billion in new agreements with Saudi Arabia.

In Syria, 53% of the more than 300,000 deaths since 2011 have been caused by the use of explosive weapons. Towns and cities have become targets of the fighting on all sides, resulting in the displacement of more than 12 million people. Beyond immediate deaths and injuries, the damage to infrastructure has been severe. Health facilities in particular have been deliberately targeted. Russia and Iran have supplied many weapons and training to the Syrian government forces, while the United States and many Gulf countries have supplied the Syrian opposition forces with military equipment. The rebels have also acquired weapons from Syrian military stocks and from the black market. US-led air strikes against ISIS have also led to hundreds of civilian deaths in Syria.

In Ukraine, where nearly 8000 people have been killed and nearly 1800 injured since April 2014, shelling in residential areas has increased civilian causalities over the past three months. Bus stops, marketplaces, schools, hospitals, and houses have become battlegrounds, with severe damage to civilian infrastructure and transportation as well as the deaths and injuries. Multiple launch rocket systems, including Grads, have been used extensively by both Ukrainian government and opposition forces. Most of the weapons used by both sides were in the Ukrainian inventory before the crisis started. However, Russia has been supplying weapons and allegedly troops to the opposition, while the US has provided training to Ukrainian government forces. Both sides also appear to be getting weapons off the black market.

In Gaza, which has suffered three large-scale military assaults over the past six years and eight years of military blockade by Israel, the most recent bombardment in 2014 killed and injured thousands of civilians, displaced another 500,000. The attacks also destroyed or damaged more than 20,000 homes, 148 schools, 15 hospitals, and Gaza’s only power plant. A recent UN report has warned that Gaza, one of the most densely populated areas in the world, may be “uninhabitable” by 2020. The weapons came from the United States, including the Hellfire missile used to strike a UN school sheltering civilians, the United Kingdom, Germany, Italy, Canada, and others.

In Nigeria, the ongoing conflict between the government and Boko Haram has resulted in thousands of civilian deaths and mass displacement. The use of explosive weapons has increased dramatically since 2011, including due to Boko Haram’s use of suicide bombers, roadside bombs, and other types of explosive weapons. The Nigerian government has also used explosive weapons in populated areas in countering the group, including in Niger in February 2015. Boko Haram reportedly gets explosives and other weapons through theft and purchase from local shops. The government has imported weapons from China, Czech Republic, Russia, South Africa, and Ukraine to counter the group.

In Sudan, government forces have recently dropped hundreds of bombs in more than 65 locations, leading to civilian deaths and mass displacement. Cluster bombs have been used in South Kordofan. Human Rights Watch documented more than 100 civilian casualties in 2014 and 2015 from aerial bombardment or after the initial attack by unexploded ordnance and other explosive remnants of war. Sudan has also allegedly bombed populated areas in South Sudan, killing civilians and destroying infrastructure there. Sudan has imported many weapons from China, Russia, and Belarus.

In South Sudan, where the president recently signed a peace agreement that seeks to end the mayhem and bloodshed that has ravaged the young country for years, the conflict has been fueled with arms from many exporters. In particular, Canada, China, and South Africa have flooded the country with weapons and ammunition. According to a recent UN report, the South Sudanese government spent almost US$30 million last year on machine guns, grenade launchers, and other weapons from China. It also procured Russian armored vehicles and Israeli rifles and attack helicopters. Meanwhile, rebel forces have obtained their weapons largely through theft, battlefield seizures, regional trafficking networks, or directly from neighbouring countries. Ammunition has been largely supplied to the rebels by Sudan. There is evidence of the use of cluster bombs by either government or opposition forces. Both sides in the conflict have destroyed critical infrastructure including homes, medical facilities, churches, and UN bases.

Overall, between 2011 and 2014, Action on Armed Violence has recorded almost 150,000 deaths and injuries from the use of explosive weapons in populated areas. 78% of these were civilian. When explosive weapons were used in populated areas, 90% of the resulting causalities were civilians. As the International Network on Explosive Weapons explains, explosive weapons use blast and fragmentation to kill and injure people in the area where they detonate, as well as to damage objects, buildings and infrastructure. When used in populated areas they tend to cause high levels of harm to individuals and communities. Destruction of infrastructure vital to the civilian population, including water and sanitation, housing, schools, and hospitals, results in a pattern of wider, long term suffering. Victims and survivors of explosive weapons can face long-term challenges of disability, psychological harm, and social and economic exclusion.

Yet there have been few outcries about how the deaths, injuries, displacement, or destruction caused by the use of explosive weapons in populated areas relate to the ATT, even when states parties or signatories are responsible for the transfers that lead to these deaths and injuries.

The fact that ATT states parties and signatories continue to engage in arms transfers that result in human suffering highlights a critical gap between law and practice. It also highlights the power of the war profiteers.

War profiteering and the arms trade

Commercial interests operating without scruples are a serious driver of arms production and sale. Corporations and governments make billions from the international arms trade. A fact sheet from Amnesty International indicates that the value of global arms transfers is approaching 100 billion USD annually. And commercial interests often influence transfer policy. “The USA has long seen arms exports as a major foreign policy and security tool, but in recent years exports are increasingly needed to help the US arms industry maintain production levels at a time of decreasing US military expenditure,” the Stockholm International Peace Research Institute has found.

The UK, which was one of the countries initially pushing for negotiation of an ATT, is the sixth largest exporter of conventional arms. While it maintains that the ATT reflects a global determination to stop irresponsible transfers, it is currently hosting Defence and Security Equipment International, one of the world’s largest arms fairs. The UK government extended formal invitations to the arms fair to many countries with records of human rights violations and those currently involved in armed conflict, including those using explosive weapons in populated areas. It has also refused to acknowledge the link between the refugee crisis and the flow of weapons to the Middle East—including those from UK transfers—and UK military intervention.

Some of the world’s other largest exporters, such as China and Russia, can argue that they are not bound by the ATT. But that is an unacceptable justification for fueling and profiting from war. Yes, the ATT is legally-binding only upon those states that ratify it. But its principles and objectives must guide behaviour of all states, because its principles and objectives should reflect those of any responsible government.

The ATT, if it is to have any meaning at all, must be used as a tool to illuminate, stigmatise, and prevent arms transfers that are responsible for death and destruction, regardless of who is selling or receiving the weapons. The carnage caused by flows of weapons to regions of conflict or to recipients that use them to bomb, shell, rape, murder, torture, and terrorise does not respect borders. Neither should the Treaty’s principles. They are the principles that must guide our engagement with each other as human beings in this shared world.

But the ATT is not enough. More is needed to prevent human suffering caused by the trade and use of arms, including explosive weapons. It is the responsibility of all states, organisations, and civil society groups to condemn and prevent arms transfers that violate law, rights, and our collective conscience. It is the responsibility of us all to stop bombing and bombardment in towns, cities, and villages. If we were to truly take up these responsibilities, the arms trade and armed conflict would look substantially different than it does today. Thus the consequences of the arms trade and armed conflict that we see today, including civilian deaths and injuries, refugee flows, grave inequality and poverty, would be substantially reduced.