The global health pandemic posed by the coronavirus (COVID-19) affects us all, and is changing rapidly every day. We are starting to get a glimpse of what this means for and what it can teach us about our world. The pandemic reminds us of the fragility of our tightly-coupled social systems and supply chains. It has gendered impacts. Some are using this crisis to increase pervasive surveillance and heighten militarisation, restrict civil liberties, and provoke spikes in gun sales, to name just a few. The effects of these kinds of responses will be vast and long-lasting, if we do not act together to respond differently.

Nafeez Ahmed argues that “Getting through coronavirus will be an exercise not just in building societal resilience, but relearning the values of cooperation, compassion, generosity and kindness, and building systems which institutionalize these values.” This is a time for solidarity and action. It is an opportunity for real and systemic change. This will also require us to be creative in our approaches to advocacy and awareness-raising. Initiatives such as “Conversations in Quarantine” by our Spanish partners of the Campaign to Stop Killer Robots are just one of many great examples sprouting up everywhere. Let us continue to show solidarity and support those most affected. We are all in this together (separately), and we can do this, together.

Please note: Because of COVID-19, many scheduled disarmament and arms control meetings have been officially cancelled or postponed. Here is a full list, which we are updating continuously. 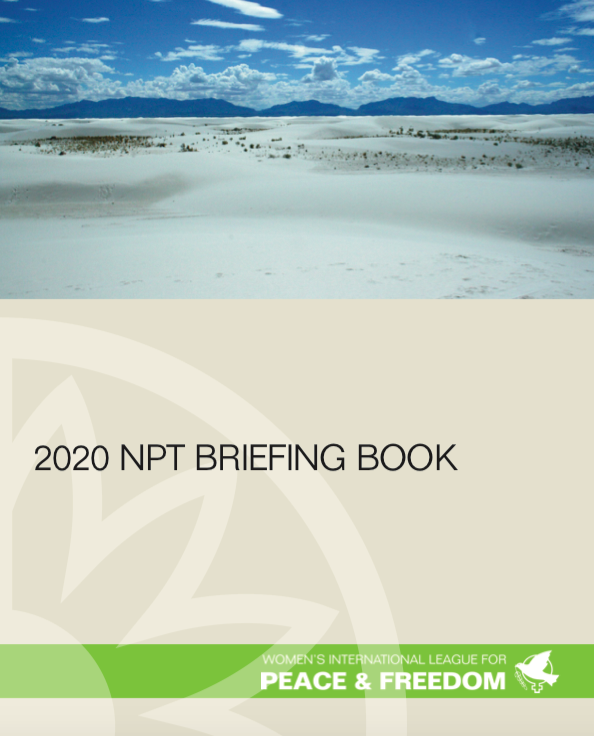 There is a very high probability that the 2020 nuclear Non-Proliferation Treaty (NPT) Review Conference (RevCon) will be postponed due to public health concerns. If your organisation is looking into moving your side event online, let us know and we will be promoting the event in our channels! As preparations for the Conference only stalled recently, RCW put out our annual NPT briefing book. It provides updates on critical issues, an overview of the history of the Treaty, and recommendations for governments.

On 26 February, the UN Security Council met to discuss the NPT ahead of the RevCon. Most participants agreed that disarmament actions and the fulfillment of non-proliferation agreements are crucial. There was a shared concern among many states that the current security challenges cannot be used as an excuse for lack of action or a return to the past. RCW participated in the meeting and published a summary report written by the Lawyer’s Committee on Nuclear Policy. 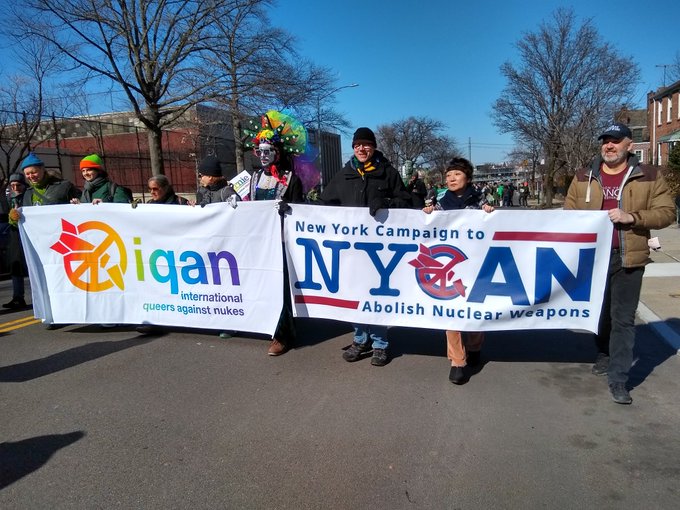 (ICRC) hosted a one day conference for states and civil society in Geneva, where they discussed the latest research on the humanitarian consequences of nuclear weapons. Our colleagues from the International Campaign to Abolish Nuclear Weapons (ICAN) participated and live-Tweeted from the meeting. The day before, the International Queers Against Nukes (IQAN) and New York Campaign to Abolish Nuclear Weapons, including RCW’s Ray Acheson, took to the streets in New York City urging the NYC Council to act on legislation to divest NYC’s pension funds from nuclear weapons.
(Photo credits: Ray Acheson)

In Berlin, the Center for Feminist Foreign Policy, together with ICAN Germany, the Heinrich-Böll-Foundation and WILPF organised the public event “Gender, power and arms: interlinkages between international armament, masculinities and discrimination” on 25 February. The panelists, including WILPF Sweden’s Gabriella Irsten, covered a lot of ground: From the gendered understanding of peace and security, the absurdity of the nuclear deterrence theory, the importance of highlighting the humanitarian consequences of nuclear attacks, to the link between gender-based violence, toxic masculinities, and weapons.

More than 70 campaigners attended the second global meeting of the Campaign to Stop Killer Robots at Argentina’s Ministry of Science and Technology in Buenos Aires from 26–28 February. Participants met fellow campaigners from around the world, participated in public activities and workshops, and strengthened their campaigning skills. It was also an opportunity to challenge the government of Argentina, and others in the region, to take a leadership role in banning autonomous weapons.

WILPF representatives from Argentina, Cameroon, Lebanon, Spain, and Sweden, and RCW’s Allison Pytlak, attended the meeting. Sylvie Ndongmo of WILPF Cameroon participated in a press conference where she highlighted WILPF’s concerns that autonomous weapons could perpetuate gender-based violence and are incompatible with feminist peace. This message was reinforced by Shirine Jurdi of WILPF Lebanon and Tica Font of WILPF Spain during a public event. It was exciting to see a photo of the WILPF delegation included in local and national media coverage of the meeting. WILPF also led a workshop on gender, feminism, and intersectionality in the process to ban killer robots which helped to set a foundation for the Campaign’s focus on these themes in coming months. The Campaign launched a new webpage on gender and autonomous weapons in March and WILPF’s Guide to Killer Robots will soon be available in French and Spanish.
(Photo credit: Wanda Muñoz)

The Campaign to Stop Killer Robots continues to release new material to accelerate mobilising for a ban on killer robots. It updated the Campaigner’s Toolkit to include three new chapters on the topics of “intersectionality and racism”, “engaging military personnel,” and “eight basics to get your media work started”. The Campaigner’s Kit will also be made available in Spanish and French over the next several weeks, with Arabic and Russian to follow later this year. On 8 March, International Women’s Day, the Campaign released a video shedding light on the links between gender equality and killer robots.

The Campaign’s member organisation PAX also just published a new report “Conflicted intelligence” which provides background information about how universities are collaborating with military and arms producers, as well as examples of research on killer robots. The report gives some recommendations to prevent any (accidental or not) contributions towards the development of lethal autonomous weapon systems. To help raise awareness, PAX has also produced the action kit “Save your university from killer robots!”

WILPF Ghana recently organised a successful event with the University of Science and Technology in Ghana, raising awareness about the need for a ban on killer robots with students. WILPF Ghana plans to continue organising similar events in the coming months, and will use the Campaign’s and WILPF’s action kits and reports to engage more students and universities on the issue.
(Photo credit: Vivian Tetteh)

As with many other UN meetings, the third consultation on a political declaration on explosive weapons in populated areas (EWIPA), scheduled to take place the week of 23 March, has been postponed. Ireland announced that given the uncertainties around the scheduling of the next consultation, the Dublin Conference to adopt the declaration, scheduled for 26 May, is also postponed until further notice.

Despite this setback, Ireland circulated a draft of the political declaration in mid-March. The International Network on Explosive Weapons (INEW), of which WILPF is a steering group member, will continue to engage in the declaration process tates must urgently commit to end bombing in populated areas. As INEW member Humanity & Inclusion recently reported, the massive bombardments in Syria since December 2019 have displaced almost one million people fleeing the fighting and bombing in Idlib.

The Seventh Biennial Meeting of States (BMS7) to consider the implementation of the UN Programme of Action to Prevent, Combat and Eradicate the Illicit Trade in Small Arms and Light Weapons in All Its Aspects (UNPoA) is currently scheduled to take place at the United Nations in New York City from 15-19 June. Due to COVID-19 this may be postponed. In the meantime, for comprehensive background on the UNPoA and why civil society organisations working on gun violence should attend, head to IANSA’s recent newsletter on the topic.

BMS7 will build on discussions and outcomes from the 2018 Third Review Conference on the UNPoA. Catch up on key issues from 2018 in RCW’s Small Arms Monitors.

IANSA will serve as the official coordinator of civil society participation in BMS7 this year, and you are encouraged to contact Rose Welsch at rose.welsch[at]iansa.org if you have any questions related to the event.

Feminist Alternatives: Challenge Militarism to Save Our Planet
1 April, online

Coronavirus: Gun sales spike in fear of chaos in US and Canada

The coronavirus pandemic is fuelling firearms and ammunition sales in Canada and the United States, as people reportedly fear a breakdown of public order with looting and robberies. Some US sellers say that an unusually high proportion of sales have been to first-time gun buyers.

According to new data from the Stockholm International Peace Research Institute (SIPRI), international arms transfers during the five-year period 2015-19 increased by 5.5 per cent compared with the previous five-year period, 2010-14. The largest exporters in the most recent period were the United States, Russia, France, Germany, and China. Saudi Arabia was the world’s largest importer. A total of 73 per cent of Saudi Arabia’s arms imports came from the USA and 13 per cent from the United Kingdom.

Greenpeace has presented a draft arms export legislation that would prevent the German government from exporting to countries that are not part of the European Union or NATO. The draft legislation proposes strict prohibition of exports to so-called “third countries” such as Mexico, Iran, Saudi-Arabia, or Myanmar. The draft legislation also prohibits technology transfer, selling of licenses and equity holdings. Greenpeace is now waiting for a response by Foreign Minister Heiko Maas and the Minister of Economy and Energy Peter Altmaier.

German Foreign Minister Heiko Maas urges the UN Security Council to tackle disarmament issues, specifically with respect to nuclear disarmament and new weapon systems such as autonomous weapons and hypersonic weapons for which there are no international regulations. He asserted that as non-permanent member of the Council, Germany is committed to highlight these issues on the agenda.

The United Nations High Representative for Disarmament Affairs, Izumi Nakamitsu says governments need to pay more attention to the “dark side” of artificial intelligence, including the implications of fully autonomous weapons, or “killer robots,” that could select and target without human intervention. She also called for governments to take stronger measures to prevent hacks of nuclear arsenals.

The Japan Confederation of A- and H-Bomb Sufferers Organisations reported that the Japanese Foreign Ministry may withdraw its backing for an upcoming exhibition at the United Nations unless references to the Fukushima nuclear disaster are removed.

US nuclear budget for 2021 skyrockets

The US administration proposes a major budget increase of 19 per cent for 2021 to sustain and modernise its nuclear arsenal. Congress will review the request of the administration of $44.5 billion in the coming weeks but will unlikely be determined until after the presidential election in November 2020.

Thirteen nuclear abolitionists blocked traffic leading into Naval Base Kitsap-Bangor, Washington on 2 March as part of a nonviolent public protest of the United States’ Trident nuclear-missile launching submarines based there. All were released shortly after. There are eight Trident submarines deployed at Bangor, which is believed to hold the nation’s largest stockpile of nuclear weapons. Six Trident submarines are deployed on the East Coast at Kings Bay, Georgia.

In these trying times where many of us are confined to our homes and with more time on our hands than usual, we encourage you to browse through our newly established database on gender and disarmament, where you can find a broad range of resources, including reports, articles, videos, podcasts, and more on the topic.

Thomas Hajnoczi, “The relationship between the NPT and the TPNW,” Journal for Peace and Nuclear Disarmament, 24 January 2020

Aaron Merat, “Making a killing: inside the Scottish town built on the arms trade,” Prospect, 3 March 2020

Women’s Rights Caucus, “Feminist declaration on the occasion of the twenty-fifth anniversary of the Fourth World Conference on Women,” March 2020

Video: “This how you change the world,” International Campaign to Abolish Nuclear Weapons (ICAN), 6 March 2020

Cassandra Jeffrey and M.V. Ramana, “Starting the Olympic torch relay in Fukushima should remind us of the dangers of nuclear power,” Japan Times, 13 March 2020